– KIDNEYS: Left kidney (see first image below) is markedly enlarged (11cm; normal around 5-7cm) with severe hydronephrosis; only a few echogenic striations/slivers of renal tissue are seen coursing from the periphery toward the renal pelvis; the remainder of the “kidney” is urine. In contrast, the Right kidney (second image below) is unremarkable (6.5cm).

– URETERS: Left ureter is markedly distended up to 10mm (normal <1mm) with urine (see below: transverse images of bladder and ureter in the third image and just the distended ureter in the fourth image; which is a sagittal view) all the way to the urinary bladder after which an apparent ureterovesicular stricture (or more likely, congenital stenosis) is present and likely preventing any significant urine flow. Right ureter is not dilated.- REST OF ABDOMEN: evidence of hypoplastic testicle in right inguinal region; rest of exam unremarkable. 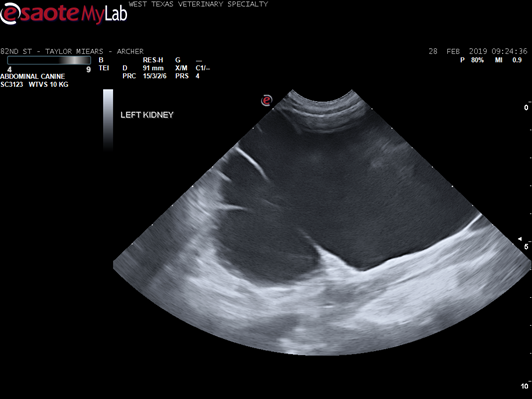 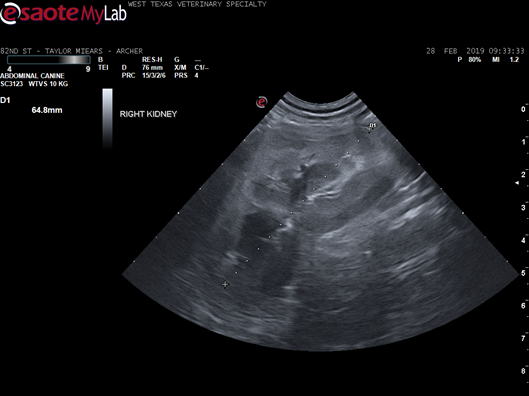 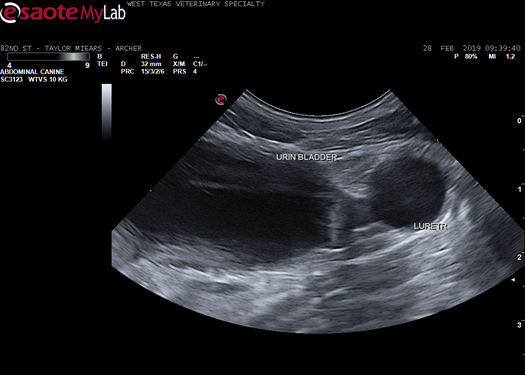 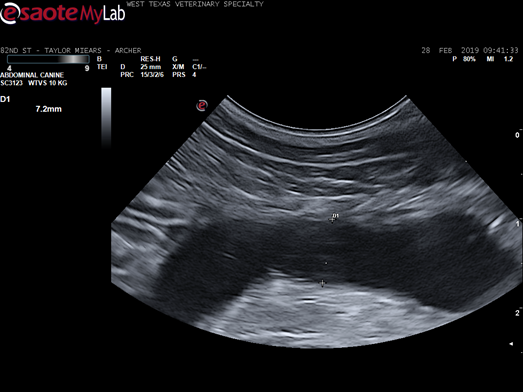 Distal Ureteral Orifice Stenosis is a rare disorder in dogs that, in this case, is most likely congenital given the young age of dog, lack of any history of urinary tract disease, and lack of any evidence of urolithiasis or UTI. Concurrent congenital anomalies are common, and in this case, unilateral cryptorchidism is present.

Several treatment options exist including cystoscopic-guided laser ablation, surgical nephrectomy and ureterectomy, and potentially surgical neoureterocystostomy. Another option is to not pursue treatment; however, the theoretical risks of eventual chronic upper/lower urinary tract disease and possibly (although not well-documented) rupture/uroabdomen warrant intervention if at all possible.

Hope ya’ll have a great week!