Can you believe March is already here? I feel like we just celebrated the start of 2022. Anyway, I thought I would share this cardiac case to kick off the month. This one is a particularly interesting because of the multiple anomalies present. Hope it’s helpful!

Normal four-chamber view of the heart below: 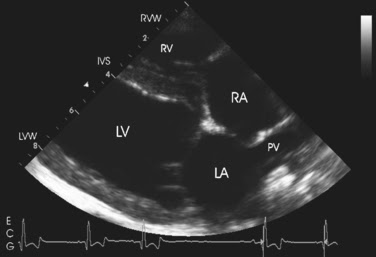 This next image is our patient, which shows a similar view. Note the markedly enlarged left ventricle (LV) and left atrium (LA), which is such that it is difficult to even see the right heart. Also, the mitral leaflets are abnormal (sort of ‘stick like’ in appearance).

The next image is the same as above but with color doppler. Note the regurgitation (mosaic pattern) back across the mitral valve (MV) from the LV to the LA. Based on the valve morphology. Mitral Valve Dysplasia is strongly suspected. 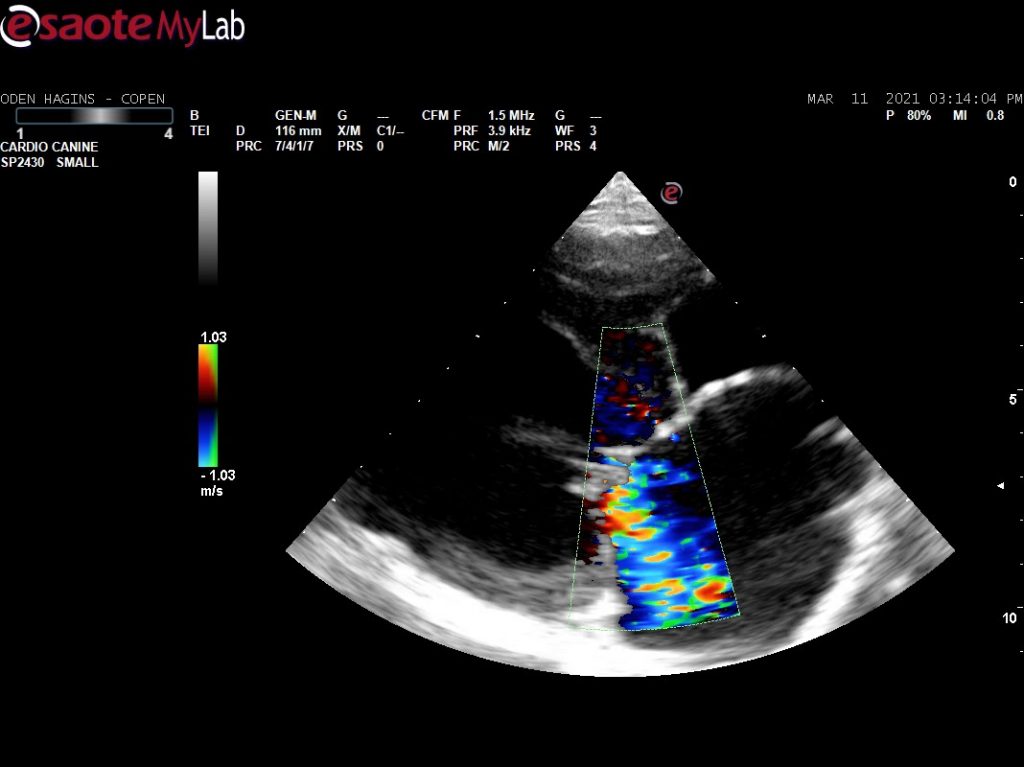 The next image is a view of the heart that shows the normal relationship between the aorta (AO) and the right ventricular outflow tract. (RVOT). 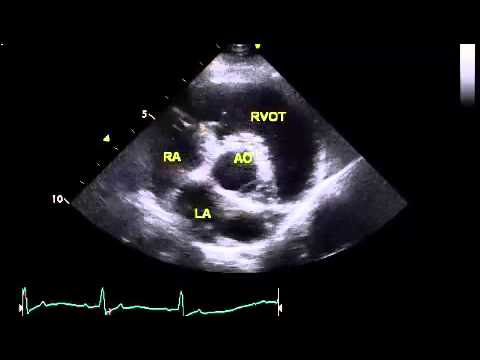 Now compare the above image to the one below, which shows (via color doppler) an abnormal connection between the aorta and main pulmonary artery (just below the RVOT). This is consistent with a patent ductus arteriosus (PDA). 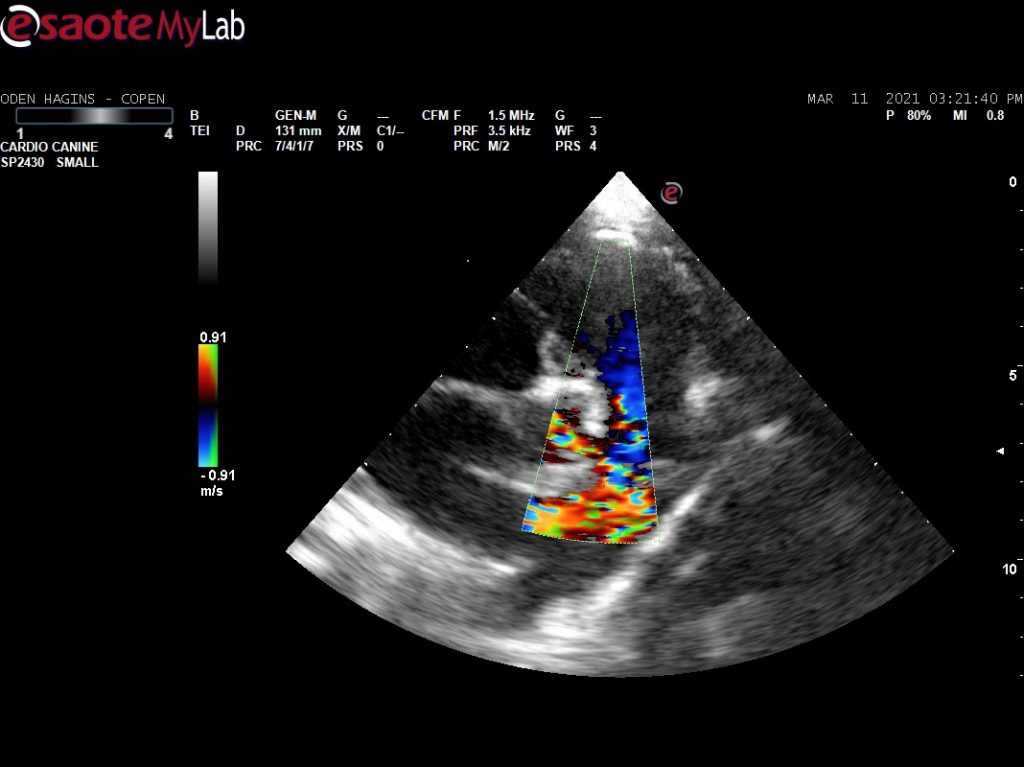 Lastly, the image below is a spectral doppler reading, which basically shows a significantly elevated blood velocity (3.9m/sec) across the aortic valve. Normal transaortic blood flow velocity is generally <2.0m/sec. Based on the modification Bernoulli equation (I won’t list it here because you probably don’t care; and I don’t remember it off the top of my head), this reveals and abnormally high pressure gradient between the LV and aorta, which is highly suspicious for Subaortic Stenosis (SAS). This gradient could also be due to the LV compensation for the mitral dysplasia, but this is less likely. 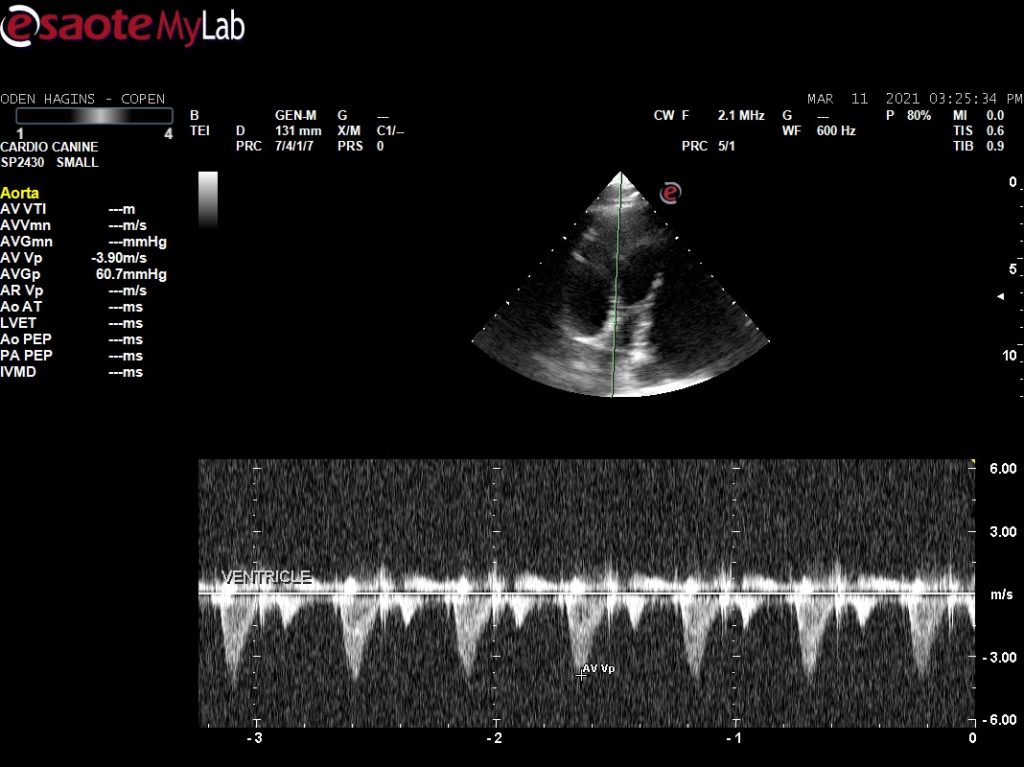 Note: this case was referred for possible treatment. All three diagnosis were confirmed at Texas A&M College of Veterinary Medicine.

So in a nutshell:

Anyway, to me the take-home message on this case is that murmurs and particularly loud (4/6 or greater) ones – present beyond 4-6 months of age warrant further investigation with an echocardiogram, because the earlier the anomalies can be treated, the better the prognosis might be. (NOTE: this patient’s veterinarian had recommended cardiac workup at a much younger age, but it was declined for several months. If diagnosed sooner, the left heart would like not have been as large as it is now.)

I hope ya’ll are having a great week and enjoyed this case as much as I did!