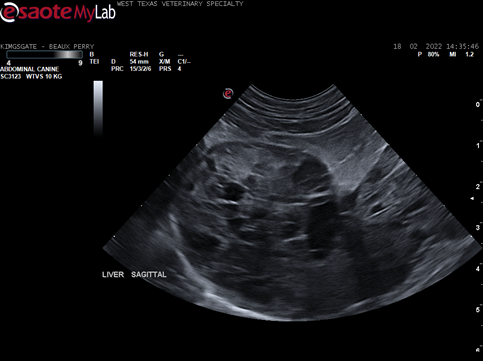 Differential diagnoses for the ultrasound findings in this study include:

Hepatic abscesses are very rare in dogs and cats. They may occur singly or, as in this case, multiple lesions throughout. The cause is not commonly identified although potential sources include penetrating trauma, ascending bacterial cholecystitis, hematogenous spread (sepsis, etc.), and migrating foreign body (grass awn, etc.). Immunosuppressed patients (FeLV, FIV, hyperadrenocorticism, etc.) are at particular risk. The most common bacteria include E. coli, although Staphylococcus spp. and anaerobes (Bacteroides, Clostridium, etc.) are relatively common.

In this case, the patient may have been immunocompromised by either FeLV or FIV although the patient was euthanized prior to performing these diagnostics.

Treatment recommendations include not only medical (culture-based antibiotic therapy) but also surgical drainage/resection if able.

The prognosis is very guarded to poor in cats, although early surgical intervention (if amenable to surgery; in this case, it was not) may improve outcome. In one study of 14 cats, the mortality rate was 79%.

The patient was unfortunately euthanized due to deterioration despite appropriate treatment.

Hepatic abscessation was the last differential on my list for this patient. And rightly so, as horses – not zebras – are the usual culprit when you hear hoofbeats. Fortunately, it was on the list, since you don’t commonly find what you’re not looking for!